A bridge too far

If you’ve been following along with my adventures you’ll know I’m a sucker for signing up for events without thinking it through. Well this time I’ve really gone and done it. It’s called Bridge to Bridge and is from Henley to Marlow. Yes, you read that right. Total distance is 14.1 Km for most people that would be a train journey. It’s even further than the longest run I’ve done to date. Starting along the same stretch as the Mile I swam a few weeks ago it then carries on for another 7 3/4 miles.

I have to admit I’ve not done anywhere near enough training. I genuinely don’t know if I’ll make the full distance. With previous swims, runs and even the 100 Mile bike ride I knew I could do at least 75% of the distance this time the event distance is many times further than I have ever swum before. Oops.

END_OF_DOCUMENT_TOKEN_TO_BE_REPLACED

Off to the pub

I end up in the pub after most of my races but this one is special — the finish line IS the pub! This last weekend I did the the Henley Swim Club to Pub 1.5km swim for the second year in a row. After the success of the Henley Mile traditional (non wetsuit) swim I figured, as the weather was so nice, I could do this one in just my swimmers too. END_OF_DOCUMENT_TOKEN_TO_BE_REPLACED

This past weekend I headed off to take part in the Henley Mile organized by Henley Swim. The name pretty much sums up the event — It’s a 1 Mile swim downstream in Henley. Though technically the event location is in Remenham, a mile and a bit downstream of Henley.

END_OF_DOCUMENT_TOKEN_TO_BE_REPLACED

The Henley Classic, or
Two adventures for the price of one

Last year I did my first ‘swim only’ event and I have to say I enjoyed it more than I thought I would. Take a look at my Henley Mile 2014 race report to find out how I got on.

This year I decided to up the distance and entered the Henley Classic. A 2.1km upstream swim along the Henley regatta course on the Thames. Despite the early start, the fact it was upstream and 1/3 mile further than’d previously swum it seemed like a good idea back in November 2014 when I signed up.

END_OF_DOCUMENT_TOKEN_TO_BE_REPLACED

Lovely day for a swim

When I was a kid on holiday if we went to the beach, or down to Devon where my grandparents lived, i would head straight into the water. More often than not i would spend too long in to water and would be told off.

You must come out of the water before your lips turn blue!!

I never learnt but i was happy turning blue so it didn’t matter. Like most kids I learned to swim at school and still have a 25M freestyle certificate somewhere in a box of childhood mementoes. I also remember doing a mile swim at school but that is just a distant memory now.

I have done 3 triathlons ( Blenheim 2013, Portsmouth 2013 & Blenheim 2014 ) and am building up to doing the Olympic distance one in London in August 2014. I have been taking swimming lessons since the beginning of the year and have spent a few evenings doing open water swims at Oxford Wakeboard and Ski club. Sadly it is all but impossible to cycle there as the two main roads are both heavy commuter traffic with no cycle provision at all, so have had to really on the kindness of my Dad giving me lift!

The swim in an Olympic distance triathlon is 1.5 km — a distance i have not yet completed in open water. So it was this in mind that I signed up for the Henley Mile. A 1 mile downstream swim in the Thames.

Looking up the course from the finish, note the Orange buoy is only 200M away!

The start time was pretty early and being a Sunday there were no trains from Oxford until after the event had finished! After a brief look at hotels in Henley, I decided the cheapest plan would be to get a train to Reading the night before, stay over and then take a taxi to the start in Remenham meadow.

The B&B was minimal in the extreme but then it was also under £40 worse the second ‘B’ in B&B was a let down as the cafe is closed on Sundays. So after dragging myself out of bed, having a pot of instant porridge (at least there was a kettle in the room) and a shower i went outside and waited for my taxi.

The taxi driver was a little bemused as to why I would want a taxi ride out into a field at 7 in the morning, and was then incredulous that it was so i could swim a mile down the Thames. At this point I was beginning to agree it was a bit of a crazy idea.

As we approached the registration area there were a surprising number of people there and with that i took my bags out of the Taxi and went off to register.

After signing in and getting the right coloured swim cap, and then a timing chip from the desk just to the right*. I had a scolding hot coffee and and then sat about for bit before it was time to get my wetsuit on and walk to the start.

Temple Island, near the finish

I left my rucksack at registration and headed off in my flip-flops. Now the event tents &c. were actually at the finish, just past temple island so we had to walk the mile upstream to the start line. And this is when it hit me just how far a mile is. After what seemed an age we still hadn’t got to the start! Luckily just beyond this little bridge was the start. There was a short race briefing and safety announcement and it was time to get in the water. Don’t think it was very cold but then a) I was wearing a wetsuit b) I don’t tend to notice the cold anyway!

And we’re off! A few people shot off like torpedoes and i suddenly felt very out of my depth, however i thought to myself

I float so what’s the worst that could happen?

What a wonderfully positive attitude! It worked though and i felt good as my arms turned over again and again I had no idea how far i’d gone as it is almost impssible to focus on anything as your hear is turning to breath — in fact because i normally wear glasses I just go with the flow until i see a big orange (or sometimes yellow) buoy which means i need to do something!

Bridge before the start. You can just see the Temple Island in the distance.

I could feel the wetsuit constricting as my muscles tired and then i saw a man pull up along side me and it gave me the encouragement to kick onwards. The world was a bit of a blur by now but i could hear the odd shout from the bank as people cheered on friends and relatives and that too helped me on my way. soon i sighted what appeared to be the 200M to go buoy and made a last final push, however 200M is still a long way and i pushed too hard to early so that last 50M were agonisingly slow & painful.

The wave of relief as i tapped the timing gantry at the finish was soon replaced with exhaustion, i was shattered. The next step was to climb out of the river using a small ladder like at the side of a swimming pool. Just hauling myself up was an effort and i caught ( and cut ) my foot one of the metal steps.

After i had got my breath back, which took a while, I went in search of my glasses…you see in a triathlon I leave my specs on the bike ready to come back from the swim but in this instance because the walk to the start was so far i had kept my glasses on and given them to a marshall at the start. I unfortunately forgot his name which did’t help but after a bit of faffing around i found a chap who had been ferrying peoples flip-flops etc from the start back to the finish and he offered to give me a lift up to the start line so i could collect my glasses. 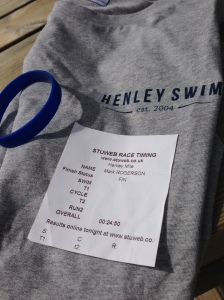 So I found the chap would had kindly looked after my glasses and then as I walked back to the finish, along the course I had just swum I felt a huge sense of accomplishment. My first open water Mile swim.

Back at the event HQ they had a PC setup with a screen and printer where you could type in your registration id and get your swim time. Think i might be getting quite good at this swimming lark as I had been among for 30 minutes but it was a very respectable 24m50s. Under 25 minutes — Woo so pleased.

I also had a look at some of the stalls and decided to buy a Henley Swim t-shirt to commemorate the occasion, you also got a little named certificate and a wrist band from Open Water Clubs. ( Wish i had know bout these before as it would have been great to collect the set over the last year as i’ve gradually improved — maybe i can do them retrospectively…)

I then decide to head home and walked back up river to Henley and decided to treat myself to a pint at the Angel on the Bridge, and it was a MILE so another pint and some fish & chips! There was a poster on the wall for another swim called the Club to Pub – a bit shorter but with a small upstream section…think i might have a go!

So from my initial enthusiasm, on the day nerves to elation I thoroughly enjoyed the Henley Mile Swim and want to thank the organisers for a great day and I hope to be back next year!

* A think a few people didn’t see other desk and get their timing chips as at the start line a few people asked where i got mine from.