Off to the pub

I end up in the pub after most of my races but this one is special — the finish line IS the pub! This last weekend I did the the Henley Swim Club to Pub 1.5km swim for the second year in a row. After the success of the Henley Mile traditional (non wetsuit) swim I figured, as the weather was so nice, I could do this one in just my swimmers too.

The Club to Pub is special in a couple of ways — firstly it is an evening race so no need for a horrible early start. So about mid afternoon I stuffed my DryRobe (like a giant dressing gown, so so good in cold weather) and swimmers into a rucksack and set off via train to Henley on Thames. After a short walk from the train station you come to the Angel on the Bridge pub. 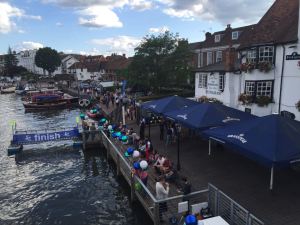 Angel on the Bridge

Which brings us to the second great thing about the event — that is the finish line. You clamber out of the water and you’re in the pub patio area! What an awesome idea.

Carrying on over the bridge and a short walk down the road you come the Henley Rowing Club. After registering and receiving the ubiquitous swim cap and timing chip. It was time to get changed. This is where going ‘traditional’ makes life so much easier. No pfaffing about struggling to get into my wetsuit. Just put my swimmers on and shoved my clothes back in the ruck sack. There was an area to leave bags behind so could come back and have a shower and get changed later.

I headed downstairs to the riverfront and there was a really good turnout. I had put my DryRobe on and was actually nice and warm. While listening to the safety briefing. The route is a little weird due to the location of the Rowing Club. YOU swim about 400M upstream round the top of a little island in the river then come back down the opposite bank. Just as I had parcelled up my DryRobe and put my glasses away. One of the organisers came over. I had been given the wrong packet for someone with a remarkably similar name— I had checked the number on the timing chip matched the number on green swim cap but not the name on the envelope.

No harm no foul, the lady had found me easily as the Green Hats were wetsuit swimmers and seeing as I wasn’t wearing one I stood out. After fetching a pair of scissors to remove the incorrect timing chip I was given a blue cap (not again, that’s the fourth one!) and a new chip. I mistakenly thought there were two waves so didn’t panic. Turned out wetsuit & traditional started together. The second wave was for the women’s start. 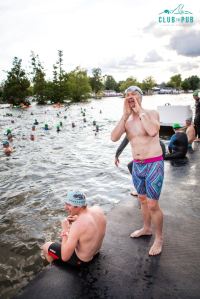 Preparing to get in

So it was then time to head over to the pontoon and as I sat on the edge (no diving in) I discovered it was a lot colder (well OK maybe not a lot but by a couple of degrees) than when I did the Mile swim. Going without the wetsuit now didn’t seem like such a good idea! As I had been delayed most people were already in the water. I was in no hurry but dropped over the edge in to the refreshing waters below…

I took it nice and steady, this was for fun after all. The upstream section was a good workout and then it was down past the houses on the little island. Really funny seeing people waving from their gardens as well as from the boats moored up along the bank. Something that seldom happens in the early morning swims.

After a solid swim the bridge came into sight and there was a really good crown winning the edge of the river and in the pub garden.

After I clambered out of the water I was greeted by the third, and most important aspect of the race…

The finishers medal doubles as a bottle opener and to go with it? A nice refreshing bottle of the special brewed Two Bells from Brakspear Beers!

Another fantastic event from the Henley Swim team.

Next up is my fourth and final swim event of the year. One which I genuinely don’t know if i will be able to finish…

As always, thank you for reading,
Mark
You can follow my antics on twitter as @netboy and don’t forget to comment and check out my other articles.

This entry was posted on Monday, August 10th, 2015 at 5:57 pm and is filed under Events, Swimming. You can follow any responses to this entry through the RSS 2.0 feed. You can leave a response, or trackback from your own site.