For such a new race the Wiggle Portsmouth Triathlon is excellently organised with a lovely route. I took part in the inaugural race last year and thoroughly enjoyed it and had been looking forward to it since I entered back in February!

One feature that I especially like is that you rack your bike in transition on the day before the race. This however did add to my troubles as what should have been a simple train journey became a huge hassle.

I packed up my kit and cycled to Oxford station a little after lunch only to find that all southbound trains where delayed. I was forced to traverse Reading station a couple of times and then a change at Guilford. Anyway long story short  I arrived at Portsmouth & Southsea station with 15 minutes to get to registration. Had a quick look at a map and headed off to the sea front.

There where still loads of people at the event site and it was a simple process to pick up my race packet with a rather fetching bright pink race hat. I stuck the race number (765) onto my bike and helmet and went to put my bike into transition. The racking is numbered which is great as you are guaranteed a space.

With my bike dropped off I had a look at the wiggle shop trailer and luckily they had loads of race belts as I somehow have misplaced mine. I sat outside and had a coffee then walked the short distance to my hotel.

The room was rather small but the bed was comfy which is really all that matters. I had a shower and headed out for something to eat.

I had had a late lunch and didn’t feel like a restaurant meal before a big race so just went to a super market and got a few pasta salad pots and some instant porridge for breakfast. Oh yeah, and a bag of vanilla custard doughnuts!

Slept pretty well but still woke up before my alarm went off. Boiled the kettle and had a coffee and the porridge.

I decided to just pack all my stuff instead of leaving a bag at the hotel so i could just go to the station after the race.

The weather was cool but sunny which was perfect. At some point my luck will run out but so far every Triathlon i have done has had perfect weather for my race. Though on some of the cycling events I have not be so lucky.

I was feeling good about the race despite having scared myself the evening before after looking out at the swim course.

One slight hiccup was that i had thought i would do the bike & run sock-less to save a few seconds (see my previous post about the quest for 4 minutes 30 seconds). I had in my infinite wisdom done the Oxford Parkrun on Saturday morning and did the run without socks to check that my trainers where comfy enough, and while i did set a new PB (stupid before a race i know but something just clicked and it felt really good) i also got a blister on my little toe. Oops.

The swim takes place in the Solent1 and allegedly the organisers picked the date specifically to have the best tide conditions for the race. I went out fast and just kept the turnover rate of my arms as high as i could. A sea swim is much harder than a lake or other open water swim. The tide was quite weak so looks like they had picked the right day!

The flat bike section is almost a figure of eight shape (without an actual cross over so i guess more like a pinched oval) and for the Sprint distance you do three laps. The Esplanade road back along the sea front was quite windy but with a great view out to sea.

Not far to go now 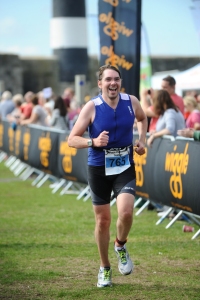 The run goes along the sea front past the amusement arcades, and unfortunately, past a fish and chip shop. Oh how i wanted to stop and just get some fish & chips! It then carries on into Old Portsmouth with a few twists and turns with a water station before turning back and passing through the Battery — the original fortified sea wall.

I was very slow with my initial pace off the bike and tried so hard to make up for it in the final stretch as i could see my stopwatch getting closer and closer to 1 hour 30 minutes.
I nearly cried as i rounded the final corner to realise that the finish funnel snaked round the field adding at least 200M still go! There was no way i could get to the finish in time.

I crossed the line and stopped my timer – it looked like I had over shot by about 30 seconds!
After picking up my goodie bag and t-shirt i went to the timing booth to get the final time. I had just missed out on my goal.

I am so so proud of my swim time. The bike was similar to last year and the run was rubbish. To be fair it was entirely my fault the run wasn’t good — should have taken the Parkrun easy on the Saturday. Anyway my overall time was a great improvement over last year so I am very happy. And next year i only need to improve by 26 seconds!!

Next up I have a nice ride round northern France — I’m doing the Wiggle French Resistance with a mate. Then it’s the big one — Garmin Barcelona!

1 The Solent is a strait separating the Isle of Wight from the mainland of England. Wikipedia — Solent.

All photos except the last are by http://solentsportsphotography.co.uk

This entry was posted on Thursday, September 4th, 2014 at 6:28 pm and is filed under Triathlon. You can follow any responses to this entry through the RSS 2.0 feed. You can leave a response, or trackback from your own site.